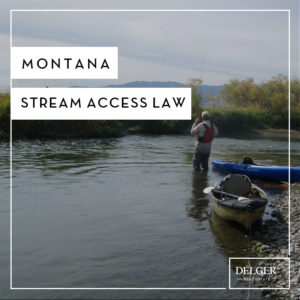 The Montana Stream Access Law says that anglers, floaters and other recreationists in Montana have full use of most natural waterways between the high-water marks for fishing and floating, along with swimming and other river or stream-related activities. In 1984, the Montana Supreme Court held that the streambed of any river or stream that has the capability to be used for recreation can be accessed by the public regardless of whether the river is navigable or who owns the streambed property. On January 16, 2014, the Montana Supreme Court, in a lawsuit filed by the Public Land/Water Access Association over access via county bridges on the Ruby river in Madison County, Montana reaffirmed the Montana Stream Access Law and the public’s right to access rivers in Montana from public easements.

The core law creating the Montana Stream Access law began with Article IX, section 3 of the 1972 Montana Constitution, which addressed state ownership of Montana waters. In 1984 in Montana Coalition for Stream Access, Inc. v. Curran, the Montana Supreme Court held that “under the public trust doctrine and the 1972 Montana Constitution, any surface waters that are capable of recreational use may be so used by the public without regard to streambed ownership or navigability for nonrecreational purposes.” This decision was expanded upon in the same year by Mont. Coalition for Stream Access, Inc. v. Hildreth. Both cases noted that streambed access did not imply that the public had a right to cross private lands to access streams. Following Curran and Hildreth, the Montana Legislature enacted the Stream Access Law in 1985. An Attorney General’s opinion added trapping to the list of permissible recreational uses. The question of stream access at bridge crossings was resolved by HB 190 in 2009. The law states that a landowner may erect fences abutting bridge structures to control livestock so long as the fence includes approved access features such as gates, stiles etc.